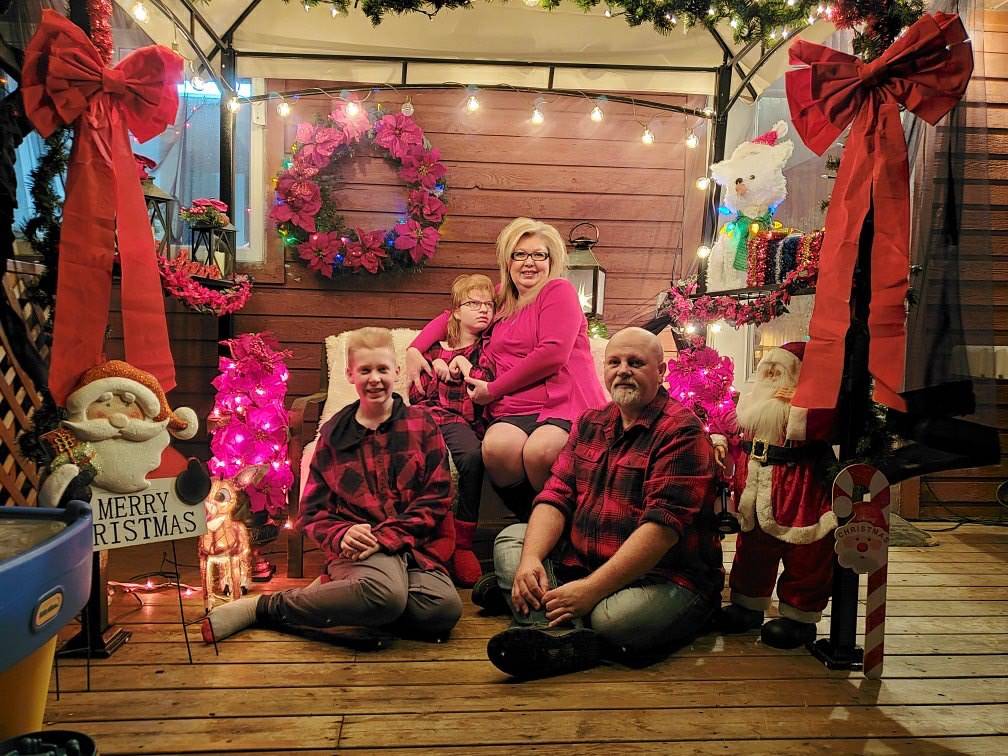 When we presented this gift to her, she just sat there with silent tears streaming down her cheeks.

She didn’t say a single word for a few minutes.

She just stared across the table… with more tears falling.

It was given to her a few months ago so that she could make the plans. Arrange the care. Wrap her mind around it.

This Momma, and the life she has been handed, is stronger than any other woman that we know. When she speaks of The Monsters, she is referring to seizures.

Five to eight seizures that take over her daughter every single day.

Baby Ashley appeared to be completely normal when she was born eleven years ago.

But six months after her birth, her Momma knew something was very wrong after the baby had her first seizure and 911 was called.

Two days into a week-long stay at the Stollery Children’s Hospital, they were given the devastating news.

Lissencephaly. A rare brain disorder where the surface of the brain appears smooth, rather than folded. 1 in 100,000 births.

And Miller-Dieker Syndrome. A very rare genetic disorder. 1 in 11,000,000 births. Brain malformation that will cause daily seizures.

The prognosis that day said that Ashely wouldn’t live past age two.

Will your marriage survive this? How will the finances hold up? What about Ashely’s older brother, Austin?

The trajectory of all of their lives slammed full force towards a different direction that day.

Do you ever look back on the years when your children were so young, and how much work it was? Trevor and I had four children under the age of 5 years old…and I can tell you I don’t honestly even remember it all. They were happy, blessedly healthy, busy kids… but it was a lot of work. When I reflect on this, it makes me think of Rhonda.

Because, unlike us, this family has never left the babyhood stage.

They have never been able to come up for air.

Ashley needs full time, hands on, care. There is no immediate family help available in their area.

Between the tonic clonic seizures, Rhonda is making her daughter specially blended food that Ashley can swallow. Wiping and cleaning her daughter. Stimulating her with music, lights, and textured toys. Moving her around so she doesn’t get sore. Making mosquito forts for her on the porch swing so she can feel the fresh air on her face without being bitten. Staying awake with her until 3:00am, 4:00am, and 5:00am every single night because her inner time clock doesn’t work like ours. Ashley will sometimes stay awake for 35 hours at a time.

Sometimes Rhonda just knows that Ashley will not sleep until the Monster has come and gone. Waiting up to a minute and a half while her daughter’s face turns grey and her lips turn blue. Holding her and talking reassurances to her while she’s seizing.

We get tired from parenting. But Rhonda’s exhaustion is like nothing I can even comprehend. She can’t sleep off this kind of tiredness.

Public outings are getting harder and harder now that Ashley is getting bigger. Transfers into and out of beds, wheelchairs, strollers, and car seats are never ending, and physically exhausting.

A care aid will come in and Rhonda will head straight to bed to sleep. She has called her son’s school to say she cannot drive him in simply because it’s just too dangerous. Because she hasn’t slept. She could be more dangerous on the road than a drunk driver.

How can a person accept and make peace with something that is slowly stealing your daughter away? One day at a time she says. I go outside on our deck around 2:00am every morning and look up at the vast beauty of the sky, and I feel such peace.

Through it all, this Momma has stayed as positive as she can! She loves this beautiful little girl. Rhonda advocates for her. Fights for her medical care. She roots for other special needs children. She attempts family outings, holiday decorating, and family adventures even though almost every single one of them couldn’t happen or goes completely sideways!

She posts quotes that say “Someday, when my life ends, I know that you will be one of the most beautiful chapters.”

This Momma has NEVER had a break! Never once has she had a shopping date, a girls trip, a romantic getaway with her husband.

Not one hour of the last eleven years has been for herself.

So, we offered her a chance to go to Mexico for one week. Plane tickets, accommodation, food, margaritas lol, and spending pesos.

After the tears stop falling, the first thing she wonders is about her son, Austin.

His entire childhood has been sacrificed to his sister. He cannot be on a sports team. He has never even been on a boat. Every camping trip has either been shortened or cancelled. And he never complains.

This young man is greater than he knows.

So, Austin is going to head out on his first plane ride ever, on his first trip ever, to spend some time with just his Mom!

To watch her son run into the ocean waves.

And, thank you to Dad, for holding down the house and caring for Ashley while they are away. And… I have to say… thank you for running up and down to the timer on this camera 82 times while you all worked patiently with Ashley to get the best picture possible!! I think this family Christmas picture is the best I have ever seen

When you see someone out there that loves someone who is rare, give them a smile or an encouraging comment.

They work so hard to care so deeply for their people.

They are tired, they are doing an amazing job, and they need to hear it.

Even the strongest fighters can be scared of a Monster, but hopefully with some backing, we can help them get through it.